Louisville, KY  1828-1869
Was in the partnerships of Harris & Lemon with John C. Harris 1830-1832 and Lemon & Kendrick 1832-1843.  Partnered with Edmund J. Daumont in 1857 and they operated under the business name of James I. Lemon & Co., now working primarily as jewelers and silver retailers. Son James Kendrick Lemon was added as a partner in 1865 and Daumont withdrew from the partnership in 1866.  James I. Lemon died in 1869 and the name of the business was changed in 1875 to James K. Lemon, working as a jewelry business.  He continued to work under his own name until his son, Brainard Lemon, joined the firm, changing the name to James K. Lemon and Son.  The business was incorporated in 1908 as Lemon & Son and closed c. 2020. 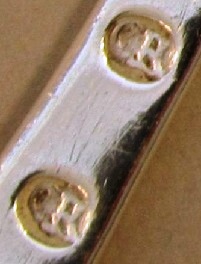 To differentiate between father and son is difficult, and they both used the same marks on their silver.  It is known that Letelier, Sr. began working in Philadelphia in 1770. It is believed Letelier, Jr. began working alongside his father in Chester County, PA in about 1795. To date, experts have been unable to differentiate silver made by the father from that made by the son.