Attleboro, MA 1880-1955
Watson & Newell was founded by Clarence L. Watson and Fred A. Newell who worked together at Cobb, Gould & Co. (1874-1880).  They expanded to Watson, Newell & Co 1886-1895, incorporating in 1895 to the Watson, Newell Co.  The company was renamed c. 1915 to the Watson Co.  With showrooms in Chicago, New York and San Francisco, Watson became a major manufacturer of sterling flatware and holloware.  The mark of the flag with the H in it was for flatware made by their subsidiary company, the Mechanics Sterling Co.  Watson also made a line of sterling holloware for Wilcox & Wagoner beginning about 1900 bearing the sword and laurel wreath mark.  When Wilcox & Wagoner folded c. 1905, Watson continued producing with this mark until 1929.  The crown/W/lion mark was used 1910-1950.  Watson was acquired by Wallace Silversmiths in 1955; their souvenir spoon dies went to J.T. Inman.
See flatware patterns. 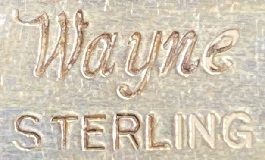 Brooklyn, NY 1886-1928
Founded by Elizur G. Webster and his son Fred H. Webster. The
business was sold to International Silver in 1928 and moved to
Meriden, CT, where it was combined with the Barbour Silver Co.
Primarily silverplaters.